Hey everybody, and happy Friday! I hope you’ve been having a good week, as we’re now less than a week away from Halloween!  Which also means that my Blog Everyday in October challenge is almost over 😱😱 It’s crazy how the time flies, isn’t it?

If you haven’t had a good week, we can at least start the weekend off, with a tasty shot, because why not? So, I figured I’ll do another Pintrest drink test; this time though, we’re going to be trying out the Scooby Snack! I saw the recipe on Pintrest, and thought it sounded yummy, plus with a name like the Scooby Snack, I just couldn’t resist. 😂 This one is a more fruity shot, with a little whipped cream to top it off.

So, without further ado, here’s the recipe and my thoughts on it!

Pour the Malibu, Midori and Pineapple juice into a shot glass. Top it with whipped cream… It’s pretty straight forward not gonna lie 😂 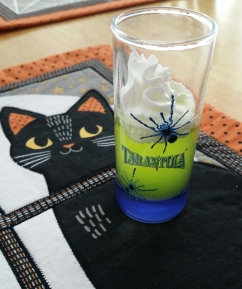 This was super delicious! The Midori tasted a lot better mixed with the Malibu and Pineapple juice as opposed to the Bailey’s and Kahlua (Don’t know what I’m talking about? Here’s my post where I try the Seduction Shot from Pintrest). In fact, when we tried it out, my dad suggested trying the Malibu with the Bailey’s and Kahlua instead of the Midori. I’ll post an update here when I try it.

Update: I tried it, and it’s pretty good! I also added whipped cream on top of it as well, which made it even better 👍

Overall, I would give the Scooby Snack shot a 7/10 for the drink itself and a 10/10 for instructions (As I mentioned before, there wasn’t much to instruct on so there’s that 😂). In my opinion, I think I would like this better as a mixed drink than a shot, so if I were to try this again, I would make it that way instead. I haven’t had shots in a while, so doing them now for these posts, especially since they’re a mix of different liquors, is kind of intense 😂 In other words… Drink Responsibly guys!!

That’s all folks! Thanks for reading today’s post, (I hope you enjoy the drink! Let me know how it goes 😊) and I will see you tomorrow with another new post!