Now, back to our scheduled program! 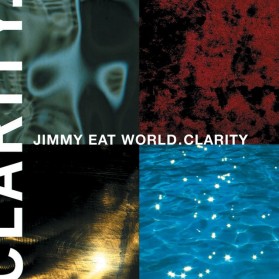 Today we’re continuing our countdown to Jimmy Eat World’s newest album release “Surviving” on Oct. 18th, with a discussion about their third studio album, Clarity. Clarity has some of my favorite songs on it, such as “Just Watch the Fireworks” and “For Me this is Heaven”.

It is also their last record that they released with Capitol Records, as they weren’t doing as well with the label as the company had hoped. Jimmy Eat World’s exit from Capitol Records is why they started touring vigorously and releasing more singles between Clarity and Bleed American. They needed the the financial backing to continue pursuing music as a career, as well as keep potential record labels interested in their music.

Despite the lackluster release, Clarity has since developed a cult following, and critical acclaim as one of the best emo albums of all time. “Goodbye Sky Harbor”, the last track on the album, is one of their longest tracks to date (And some would say, their most experimental), coming in at around 16 minutes.

These are some of the tracks that stood out to me when I thought about my favorite songs from this album. However, a couple honorable mentions include:

“Your New Aesthetic” and “Believe in What You Want” both deal with the themes of dealing with an industry that’s more focused on the money and politics rather than the art itself.

“Lucky Denver Mint” is their big hit from the album, as it was used in the Drew Barrymore movie, Never Been Kissed, even though it didn’t make it on to the movie soundtrack.

Now, let’s delve into my favorite songs from the album!

This is the first song of the album, and though it starts off slow, it builds up to a great climactic moment towards the end of the song, making it all worth it. These build ups are something Jimmy Eat World does a lot in their music, and, in my opinion, do it very well.

It’s an interesting song, as it seems to be about reflecting on the events of the weekend, and how now that everything is done, he can understand what happened with clarity (no pun intended). It’s also interesting, as it is one of the more explicitly stated references that they made about drug use (and if I remember correctly, the first as well), which they have a whole trio of songs that goes through the ups and downs of drug abuse on their album Futures (I’ll talk about this more when we get to that album).

Honestly, I just think this song is fun and catchy and captures that feeling of uncertainty, nervousness and potential that encompasses having a crush. It’s a more upbeat rock song, and Jim’s vocals on this track convey all those frustrations that also come with having a crush so well.

This song has some great lyrical lines to it, but even more than that, Adkins voice emphasizes the feeling behind the song amazingly. The first lines of the song

Are just beautiful as well. Along with that, I love how the song has a mashup of both more band heavy parts and instances of where Jim’s voice is the main focus. I don’t know if that made any sense, (I’m not as good with all the technical musical terms), but if you listen to the song, it will make more sense 😅

“For Me This Is Heaven”

By far one of my favorite songs by Jimmy Eat World, “For Me This is Heaven” has some of the best lyrics, hands down. Some of my favorite lines that come to mind are “The first star I see may not be a star/ Can’t do a thing but wait/So let’s wait for one more”, “You can lose yourself in your courage”,

Since I listened to this album a lot during high school as well, “Blister” was one of my favorite songs at the time because of it’s fast paced, “harder” rock sound. It’s still an awesome song, and definitely a good track to add to your workout playlist 👌

If you’re interested in listening to the whole album, here’s a playlist from Jimmy Eat World’s Youtube channel:

Thank you for reading (and listening), I hope you enjoyed! I’ll come back to you tomorrow with more Jimmy Eat World music!