Hey everybody, I hope you’re having an awesome week!

A little over a month ago, I went to the San Diego Zoo Safari Park with my boyfriend, my friend Harini, and a friend of hers. I wrote a post about the initial visit, so if you want to read that,you can click here.

I included some pictures I took, but for those of you who may not know, I’m bad about taking pictures, especially when I’m out and about. I’m one of those people who enjoys what they’re doing in the moment, and doesn’t really think about documenting it to look back on later. For example, when I went to Florida for vacation a few years ago, I only took about 8 photos during my week long trip there (and Harini still makes fun of me for that to this day).

Anyways, because I didn’t take that many photos, my friend Harini was a kind lovely person, as always, and sent me more awesome pictures. I liked them so much, that I felt like making another post about it, because why not? So here are some more pictures! 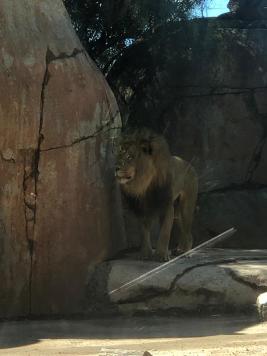 First up, are some more pictures of lions! This is something I forgot to mention in my other post, but the male lion kept pacing around and coming right up to the glass to look at everyone. After doing this for a few minutes, he eventually just made himself comfortable and laid down right by the glass, with his back to us, of course.

Now we have a  a picture of the cheetah after it was done running. The zookeeper’s would reward the cheetah with a bowl of food once it completed a sprint. I already went into more detail about the cheetah run in my previous post, so I’m going to leave it at that.

Another close up of Joanne the tiger during the Tiger Talk. This is definitely a good event to go to if you want to get some good close ups of the tigers. When we first went to the Tiger Trail, the tigers weren’t out and about for a good photo opportunity, probably because the zookeepers were preparing for this event. 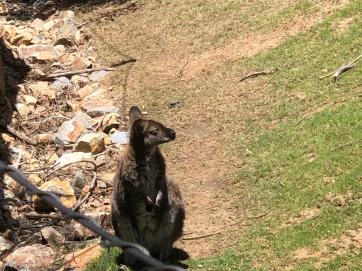 Here are some more photos from the Walkabout Australia exhibit! This is the area where you can go inside and walk through the enclosure itself. These are the wallabies in the enclosure, as the kangaroos are having their own area being built that’s still being worked on.

Finally, here are the flamingos that are located near the entrance of the park. There are two different places where you can find them; here and in the water area down by the African Outpost. I always love seeing the flamingos, because they’re so pretty, and they are really photogenic!

I hope you enjoyed the lovely photos, and thanks again Harini for sending them to me 😊

That’s about all I’ve got for this week, so have a wonderful weekend, and I will see you on Tuesday for the next post!