*Disclaimer: There may be some spoilers in the following review, READER DISCRETION IS ADVISED*

Hello everybody, I hope you had a great weekend! Here’s my review of The Search by Nora Roberts! 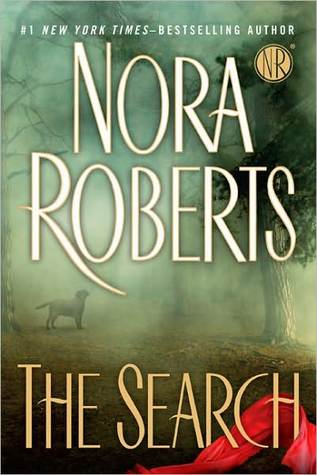 Twenty-nine year old Fiona lives on the island of Orcas, up in the Pacific northwest, where she runs a canine search and rescue unit, while teaching training courses for dog owners, whether it’s one on one behavioral lessons or training to become of the canine Search and Rescue unit. Before she lived on Orcas, Fiona had fallen into the clutches of a serial killer, but managed to escape before he ultimately killed her. Unfortunately, he still took away someone she loved as revenge, and Fiona has been dealing with the grief for the past seven years.

Simon is new to the island, a woodcutting artist, who is rough around the edges and an interest for lots of the women on the island because of his good looks. He goes to Fiona for training for his new puppy, Jaws, and from there, a whirlwind romance begins to develop. Around this time though, a prodigy for the serial killer who went after Fiona seven years ago emerges, and there are signs pointing to Fiona being one of his intended victims. Now, Fiona must deal with the circumstances of this new development as well as her budding romance with Simon.

The plot itself is well paced, with a good amount of intrigue, and the climax of the story had more impact than in the other two thriller type books from Nora Roberts I read before. The only problem I have with the climax is the confrontation between Fiona and Eckles came across a little cheesy when I first read it. After I thinking about it though, it makes sense Eckles acted the way he did, based on the way his character is portrayed throughout the novel. Even though the plot is interesting and is a strong aspect of the story, The Search is more character focused than plot focused book.

In the beginning, Fiona didn’t want to feel victimized by her past trauma, and is accepting the grief from losing her special someone as a result of this trauma.  In doing so, she built a wall around herself, even keeping her loved ones at a distance to maintain her independence. As her romance with Simon develops, Fiona learns how to not only handle her, but how to let people in and help her. He reminds her that she is not alone, and she doesn’t need to push people away when they want to support her.

The romance between Fiona and Simon develops organically and provides a good backbone to the novel. Simon as an individual character did get on my nerves a little bit, but it is how his character is written, so he is definitely a well written character. I also liked Fiona enough where if she was happy with Simon, then I wanted her to end up with him in the end.

In addition to all that, I  like how Eckles (one of the villains of the story) is developed, for the most part. I think he is given a decent back story that explains what made him the way he is in the present. Some parts of it probably could have been developed more, but I don’t think it has too much affect on the overall story. The exploration of his need to become notorious, through him wanting to write a tell-all book, to his confrontation with Fiona in the climax of the story, added an interesting aspect to his character. In the end,  the characters are well developed enough to drive the story to a satisfying conclusion.

When I read The Witness, one aspect I remember is how weird the dialogue read for me sometimes. I assumed it was because the main character was a genius who lacked social skills, but I noticed it here too. For the most part the dialogue was fine, but there were times when I was reading it, and in my head it sounded stiff and awkward. The books from Nora Roberts that I really loved was the Bridal Quartet, and now I want to re-read those books to see if they have the same issues. I don’t know if it’s something that’s more apparent in her more thriller leaning books, or if it’s just how her dialogue is written in general, but it can take me out of the story at times. Other than that, I liked how Robert’s set the scene of the story, developed the characters, and paced the plot in relation to the character developments.

In the past few months, my boyfriend’s mom has lent me three Nora Robert’s books: Shelter in Place, The Witness, and The Search. I would categorize these three books as Robert’s more “thriller/suspense” novels, as opposed to her pure romance novels. However, these novels still focus mainly on the romance of the main character, with the “thriller/suspense” aspect of the novel serving as an underlying subplot to the novel. Out of these three novels, I like The Search the most out of all of them (probably because of the amount of dogs in the book, I’m a sucker for dogs 😂), followed by Shelter in Place  and then The Witness.

I enjoyed reading The Search overall, and read at least one or two chapters everyday (the chapters themselves were abut fifteen to twenty pages each, so I would say I read it in good time). The story itself was interesting, and the characters weren’t my favorite characters of all time, but I liked them enough to have be invested in their story. I also enjoyed reading about Fiona’s work with her dog training and the search and rescue unit. At the end of the day, I would rate The Search a 4.5 out of 5 stars